Weird Al’s releasing 8 videos in 8 days or something weird like that!  I’m way behind, but this one just makes me laugh (as they all do).  PLUS – he wears a tin foil hat in this one!  FOR THE WIN!

“I’m saving you from yourself.  That’s what’s going on,” Hazard said.  And then scrunched her face and pulled her messy blonde hair back behind a couple of rather large ears.

She paused while Bloom’n watched in quiet alarm as this 18 year old – or whatever tender age she was – studied her.  All she could think to herself was:  how did I mistake this?  But Bloom’n’s mind was stuck.  Completely stuck, the question spinning and spinning around in her head.

And Hazard answered right on cue, precisely as if she had read Bloom’n’s innermost thoughts.

“You always do this,” the kid said, her words etched in the youthful cocktail that mixed together boredom with disappointment.  Hazard locked her clear young gaze onto Bloom’n who returned the favor but with significantly older and somewhat bloodshot and thoroughly preoccupied eyes that presently were frantically pulling double-duty scanning her inner memory banks.

“Always do what,” Bloom’n stalled.

“Yeah…and that too.”  Hazard huffed briefly and turned her gaze abruptly in the direction of Sprocket who sat with his legs outstretched and the heels of his boots resting on the fourth chair of their front-and-center table to the world.  He seemed quite *actively* disengaged — ages ago and then some — in exuberant awe of the menu or the waitress or the hardwood flooring or the dust on the ceiling light fixture or — most likely — anywhere but here and anywhere but now.  It was as if he sensed something terribly amiss between Bloom’n and Hazard, and for reasons she couldn’t fathom (sarcasm and feigned surprise intended), Bloom’n figured Sprocket wanted nothing at all of whatever the hell was going on between her and Hazard.

Lucky him, Bloom’n grunted to herself and then hunkered down onto their table to the world.  She had nowhere else to go at the moment and this kid wasn’t about to let her off the hook.  So she ignored all the perky Hello Day GOLLY GEE WHIZ ME TOO messages — which was a feat in and of itself.  And instead she tried desperately to regroup her mind all while under the late-in-years teenage glare from a more than slightly miffed or disgusted (Bloom’n couldn’t tell which) girl.

Hazard rattled her head briefly side to side in teeny tiny motions.  “Yeah…that’s right.  Let it sink in.  Give it time.  Give it room,” Hazard whispered with the sharpness of a knife.  “Let the realization blossom…” she paused.  She lifted her eyebrows and smirked.  “Appropriate enough for you, Bloom’n.  Let the reality blossom.”  She breathed slowly.

“Get over here and stop making a spectacle of yourself.”

A young voice said this.

Hazard swatted at Bloom’n, urging her to park herself down at the front table of  a chi-chi place that they — Bloom’n, Sprocket, and now Hazard —  had poured themselves into.

Bloom’n didn’t know it for a fact, but she assumed she had been basically pushed into this place because, well, she had been basically on the verge of making a scene with Hello Day overall, and the last Hello Day message in particular.  You know…that unmentionable one.  Okay fine, she thought, and went along with being Activist Interrupted.  But she thought:  just don’t for a second believe that you’ve distracted me from my mission.  Just don’t ever think that…unless you want to be very rudely surprised.  Still, she kept silent on all of this because her commitment needed no external validation.  So she looked around instead.

The place that she surveyed wanted to be some high brow place in Paris, but it wasn’t.  The place  wanted to be status, but it couldn’t pull that off in spite of its desire.  Still, like every restaurant down the street, Le Bistrot did manage to pull out its windows from their encasement during the summer months to allow the breeze to flow through.  And, well, it just seemed like the patrons were that much closer to the so-called “animals” that were humans in their so-called “cage pens” that were defined by a five-block Art Fair on the streets.

It was odd.  It was wierd.  And it was bizarre to have moved from being one of the animals on the street to now being a close-but-not-too-close-chi-chi observer, Bloom’n shrugged to herself.  But that’s where they currently found themselves:   Bloom’n, Sprocket, and Hazard around a table with a front row vista to the world immediately outside their windowless window.

Hello Day holograms bobbed and weaved in the air, hanging around the necks of every passerby.  They were a river, the people were.  A river of suburbanites mainly, in the city for a day to graze through an annual art fair, clogging up the city streets with their Ikea minds.

Then all of sudden she studied Hazard, who hadn’t been there before.  Who was a kid.  Not her kid.  But a kid.  All of 18 years or something.  She wasn’t entirely sure.  But the thing about Hazard is he had a habit of appearing out of nowhere.  She kind of liked that about him.  But it kind of bothered her too.  Because Hazard never showed up just for anything.  No…he always showed up for something.

“Okay kid,” she said while pulling her chair in closer to him and ignoring the mass of suburbanites parading like Urban Poser Diehards in front of them.  Sprocket had kicked back.  In wait of a menu or something, no doubt.  So he was fine.  But this kid — Hazard — well, she paused.  Folded her arms across the table.  Stared the kid straight in the eyes and said, “So why now, kid?  You show up all of a sudden.  What’s going on here.” 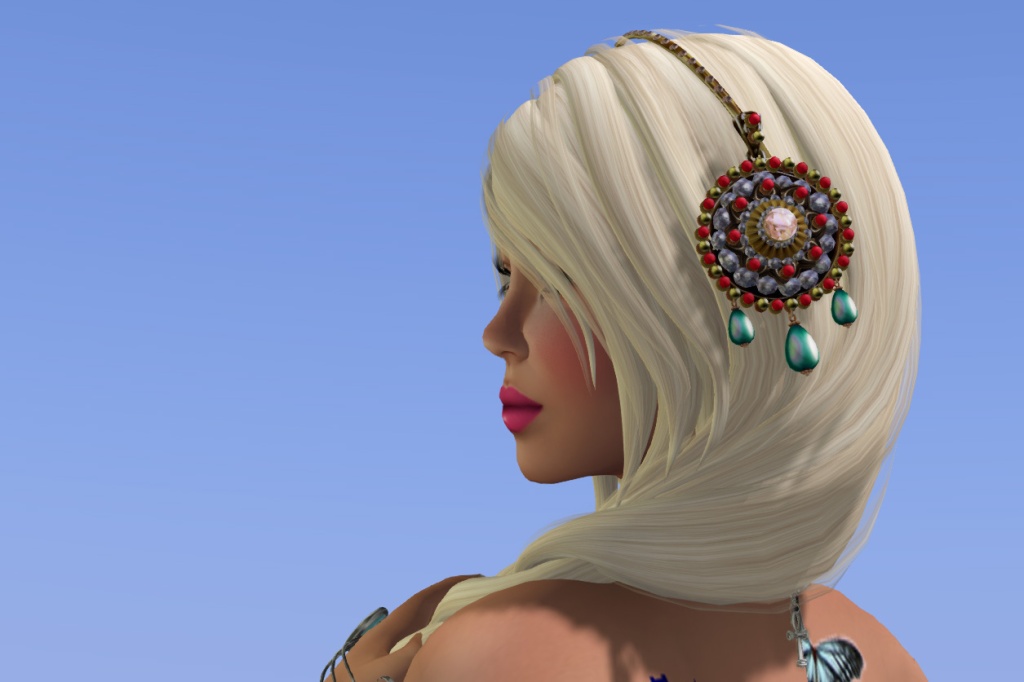 I am incredibly fortunate to have such amazing talented friends, old and new who share their creations with me.  Tiffy Vella of Eclectica really sparked this post.  Tiffy is the uber talented creator of gorgeously designed jewelry and of late, she has branched off into creating really glorious shoes.

I built this entire wardrobe around Tiffy’s shoes (shown close up in the third photo below).  They just scream SUMMER in the most beautiful of ways and made me want to find a wonderfully fashionably laid back look to go with them.  I could live in this outfit in the atomic world.  I certain have been living in it inworld…especially the shoes!  That’s really rather remarkable for someone like me who tends to prefer going barefoot.  But I gotta say, I really do love these sandals.  Thank you, Tiffy!  Your work never ceases to amaze!

Equally lovely is this amazing headdress dropped to me by Cane Sutter, creator of Folly.  I recently learned about Folly when, during the wonderful Fantasy Faire, Cane dropped several items to me.  I am so grateful she did.  I love her creations.  They really are astounding.  Take a look at the texture for the HUD that comes with this great, multifaceted headdress and you’ll see what I mean.  The work is utterly intricate and the variety of color combinations on the piece is mindboggling.

Hit the slurls at the end of this post and pick up these items for yourself.  You’ll live in them, I swear you will.  And you’ll love ever minute of it! 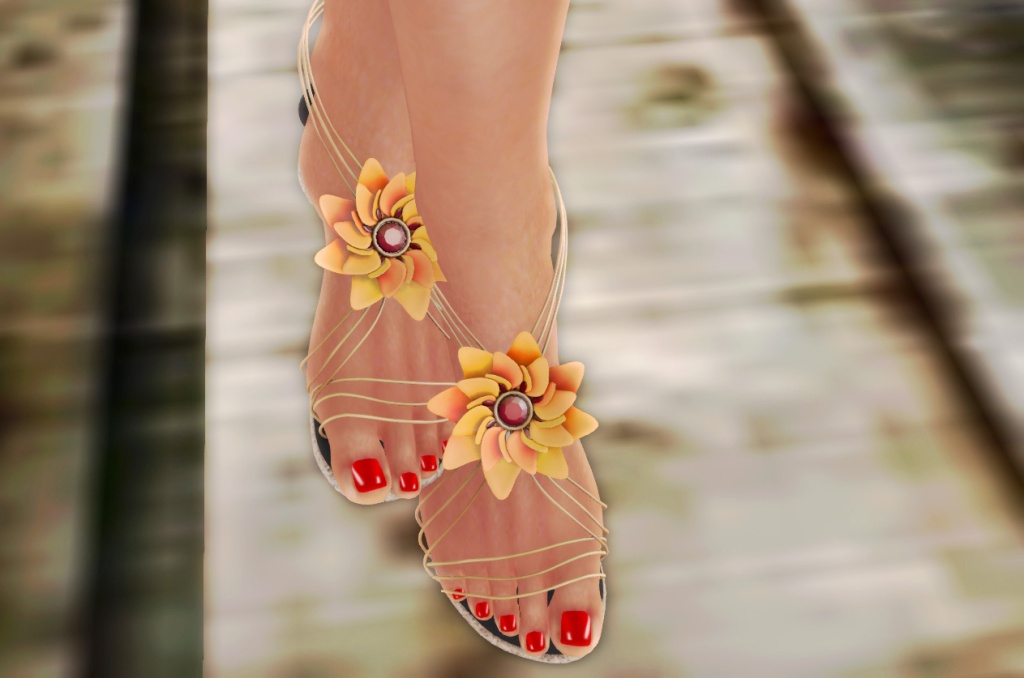 Bloom’n thought.  For a long while.  And arrived at this:  when life gives you the Cone of Silence, wrap it in tin foil, plunk it onto your head, and hunker down.  If you’re lucky, a meltdown is on its way.